One by one, I examined the bursts of photographs.  Each one had a different expression, a slight movement, a new reaction. My son had an animated face, and he was clearly not impressed by the impromptu photo shoot. Suddenly, I stopped. It was just an ordinary photo – a capture of my son glancing directly into the lens – neither smiling or frowning. His eyebrows arched, his full cheeks in view, and a pensive expression.   His photo immediately invoked a sense of melancholy. 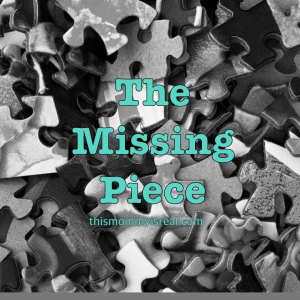 I began to search for the source in my phone.  I remember the feel of the photo itself, and the moment it was given to me.  Not quite sepia, but not quite black and white. The upper right top of the photo had been torn, with parts already disintegrating due to age. Other parts were whitening, and the 60+ years of handling had taken their toll. Yet, there, in the center, was a chubby little baby boy. He had big full cheeks, a full nose and eyes full of expression. His face was all too familiar….he was the missing piece.

I have stared at this photo off and on for years.  I finally decided to save it from further wear and a took picture of it in my phone, in hopes that maybe some day, I would see those features in person again. During my 4d ultrasound, we saw the features of that same baby, and my hopes were renewed.

As I looked at my son’s photo, I realized what I had been hoping for was staring right back at me  My son strongly resembled the little boy in the photo . While not a complete carbon copy, you can see the features carried over.  The rounded cheeks, the same nose, and the beginnings of almond shaped eyes. The full lips with a cupid’s bow. My son had inherited features of his late grandfather.

The confirmation of this from various family members brought both joy and sadness. My son was named in honor of my father, and now, I can see, rightfully so. I put their photos side by side in a collage, hoping to one day print it out for my son to keep. He will never meet this missing piece in his life.

My heart ached at this thought – my father would have been a wonderful grandparent. He would have proudly declared that my son was his copy – his namesake – his joy. He would have made funny jokes about his expressions, and tell silly stories about my own childhood to make my son laugh. He was a homebody, but I know he wouldn’t have hesitated to take his grandson to the zoo, the movies, or even just a simple trip to the park. He would have taught him to read. He would have encouraged him to do well in school. He would have emphasized the value of being a selfless, good person.

Not to say the current people in his life could not do the same. I may be biased, but my father really was one of a kind. He struggled so much in his life, but did not allow his children to feel it. Instead, he made do with what he had and raised us in his own comical way.

The fact that my son would never really know my father is deeply painful. I often fantasize what life would have been like if he had never passed away – where we would all live, what holidays would look like, and how he would have felt upon finding out he was going to be a grandfather. I dream about his outings with my son, and the adventures they would have. I think about my son’s reactions to the same silly childhood stories that his grandfather told me. So many what-ifs and dreams make pain of the missing piece of this life so hard to forget.

I relive the stories and memories with my own siblings. I keep pictures in safe places, and wait for the day where my son can see where he came from. I’d mention him to my son off and on, wondering if his soul is a part of my son’s.

I keep telling myself to remember it all.  Recall the stories both sad and happy. Remember the feelings, the lessons, and even the struggle. Relive the excitement and heartache. Always, retell the stories. I can do the things my father would have done. My son could somehow know his grandfather, even if indirectly.

With those hopes in mind, I remember to mark the old photo in my phone as favorite. I make a mental note to print the comparison photo in mind and place in a special envelope. “One day”, I reassure myself, “one day the missing piece will be his to keep.”

9 thoughts on “The Missing Piece”