We glance back and forth and play, but the conversation is one sided. We mime and move in exaggerated motions. I hope for sound. I speak in long, sing-song tones. I gesture and smile. I try my best to coax the “right” response. It never comes. Instead, my young son smiles back at me, and continues our little game in his own way. 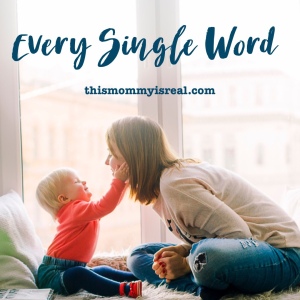 I stare blankly into the distance. I’m hoping that somehow, I was just wrong. I was putting so much pressure on him. He’s just a baby really…how much could he really say anyway?

To my dismay – more than what I fathomed.

The milestone visits with the pedestrian were somewhat nerve wracking. I had no doubt that my son was a healthy and intelligent child. Yet, there was always “concern” over his limited / non-existent language.

I had heard repeatedly that “boys were late” when it came to speaking. I heard stories of boys not talking until after 2-3 years old. Yet, with each visit, I had to point out my son did not speak say the same sounds (ba, ma, da) or use any repeat combination of sounds in meaningful way. When he eventually did, it always seemed like he was behind. He wasn’t saying enough.

Around the 15 month mark, my pediatrician decided to take action. She reassured me that the only diagnosis she had for him at the time was “Expressive Language Delay”. He had some red flags for autism, but no definite diagnosis to his age. She would refer him to some services and he would get supportive therapy. (My experiences are detailed in other blog posts).

Eventually, he was assigned to a speech therapist who comes to our home on a weekly basis. She was a sweet, outgoing young woman. She had a plan, and she stuck with it. The first sessions were rough. Our son had little experience with one on one teaching sessions. He was used to getting what he wanted, and giving up when he lost interest.

The therapist helped in so many ways. She gave us supportive suggestions and encouragement. She helped our son find effective ways to tell us what he wanted. She helped create an environment that encouraged him to communicate. Eventually, he began to enjoy being around her. He willingly utilized the communications tools she taught him, and we began to see changes in his attitude and behavior. But, the words were still slow to come. Effective communications, but still a delay in expressive language.

We kept at it and we began to see signs that things were changing. He began to vocalize more. Some sounds began to resemble words. He began to identify animals, shapes and colors by sounds. They weren’t always perfect, but it was clear that he was using the same sound to identify the item.

The words were getting clearer. Then, it got even better. My husband was playing a game with him and asked, “Where’s Mommy?” He happily ran to me, pointed and said, “Mama!” My heart melted, and I knelt down to hug him.

Not too long ago, I was wrapping a gift. He noticed, looked at me at pointed at it. He signed that he wanted the cup. I initially told him no, and stated that it wasn’t his. He had a crestfallen look and sat in silence. I looked at him again and asked if he really wanted the cup. He jumped up in excitement, smiled and nodded, and gave his equivalent to, “Cup, yes!”

I didn’t have the heart to deny him. Inside, I was bursting with pride. All this time, we had struggled to communicate. Weeks of hard work were finally paying off. And with just a few words, I knew. It was only going to get better.

In the days following, he continued to experiment with his words. He practiced the ones that he did know. He tried words that were new. He babbled every chance he got. He followed his therapist and tried to replicate the sounds she made.

We play our same games again, but this time it’s different. There are responses, both verbal and non-verbal. There’s an understanding between us. I hear the words I’ve waited for. I hear laughter and sounds of pride when he effectively communicates.

21 thoughts on “Every Single Word”