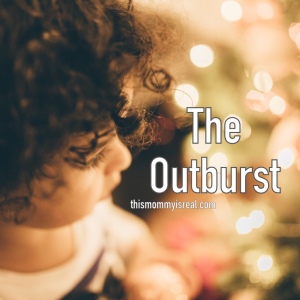 The television blares with the sounds of nursery rhymes. My son climbs too close to the tv stand, engrossed by the moving sights and the repetitive melody. I wince my nose and send a warning that he is again, too close to the tv. It’s all but background noise to a 13 month old.

I wince again, with a familiar, putrid smell permeating the room. I pick up my son, amidst his loud protests. He struggles.

I continue with the process of changing him, but it can’t happen fast enough. A tantrum ensues. My son’s arms and legs flail, and soiled wipes make their way outside of his diaper. The contents touch everything. To my horror, it spreads to his limbs, noticeable streaks going up his arms. He cries louder and fights as hard as he can manage. He pees on himself in the process and manages to touch more soiled items.

STOP TOUCHING THE DAMN POOP! I yell in a loud, booming voice.

My voice is angry, harsh and frustrated. I attempt to hold his legs together to avoid any further contamination. His arms and hand were not so lucky. The realization fuels another angry outburst.

My son’s voice also changes. He has never heard such anger come from his mother. It frightens him, and he can only respond the one way he knows how. The thrashing stops, but is replaced by fearful throaty cries, that steal as much breath as possible. He’s scared.

I am still frustrated. It’s close to bedtime and now, he needs another bath. It takes a serious amount of willpower to undress him and carefully bathe him without screaming again. He continued to cry, sensing the tension and stern look on his mother’s face.

A small reprieve comes. There is no movement or sound between the two of us. He stares down at the water. I breathe in heavily, fighting emotions. This was not supposed to happen. I am not that mother.

The silence is broken by movement in the tub. He looks at me and I lecture him. He cries again. At this age, a lecture means nothing more than a sign. Mommy is angry. Mommy is mad at me.

I wrap him in his towel, preparing him for bed. Soft sobs escape from his mouth. He’s still affected by my actions. My heart breaks.

The next moment, he is in my arms, the same way he did when was four months old. The sobs become stifled as he buried himself further. He looks at me. He’s waiting for my acceptance.

I hold him closer and comfort him. I cradle him like I did so many months ago. I breathe in deeply as I caress his head. I miss the little baby moments. It makes me sad and I am torn at my previous actions. His eyes continue to search for forgiveness. For some reason, I cannot compromise.

His father soon comes home. I ask for private time. I needed to completely calm myself. I needed a moment away and alone.

It’s many hours later. I feel better now, but yet, I feel sadness over the pain he went through. This was my first angry outburst at him. I felt like I wasn’t in control of the situation. If I had issues now, what would it be like months or years from now? As angry as I was in the moment, the burning feeling of guilt remains. It burns in my chest and forces a heavy, solemn mood. I want so much for it to go away, because this situation will not be the first of its kind. I wanted to be able to ignore the feeling and move on.

In time, it does. The realization sinks in that these moments will happen throughout our lives. It’s part of parenthood, and eventually (soon) I’ll learn to deal.

20 thoughts on “The Outburst”