Late last year, my husband and I were running a few last minute errands. When we left the store, we saw a man uncomfortably moving his mobility scooter.  He was still seated in it, and was attempting to scoot it step by step. He was slowly doing this with much difficulty and in the middle of the road. We wanted to let him be, but we hesitated to do so. It seemed so dangerous to leave him. 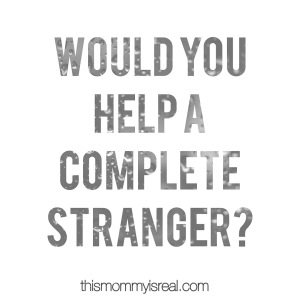 He noticed us, and called us over. It turned out that his mobility scooter’s battery had died during his trip to the store. He had picked up some food and some beer for a small BBQ at his home. He asked us if we could put his scooter in our car and drive him there. His home was supposedly a few blocks away.

He apparently did not have a cell phone on him.  He also said that no one at the party (on a weekday?) would be able to pick him up. When prompted to charge his scooter, he stated he had left the cord at home. He also stated he had already spent his money so he didn’t have anything for a cab.

We did help him out, but it didn’t include putting him in our SUV.

What would you have done in the situation? Comment and I’ll let you know what we did!

Kindness is always good, but sometimes you have to be a little creative and cautious with how you do it. Sounds weird? Think about any situation you felt uncomfortable. Sometimes you need to listen to your gut feeling !
💙, jenn