When people discovered that I was going to Mauritius, the most common question I got was, “Where is that?” The tiny little island is so far into the Indian Ocean, that many people aren’t aware of it.

Mauritius is located far to the East of Madagascar. It is actually known to those in the Middle East and in Europe as a popular vacation spot.  It’s a beautiful country, rich with wonderful beaches and landscapes, and a mix of culture and people.  The terrain makes it far from the common idea of an African nation.  To me, it’s like the Hawaii of Africa, but with its own rich personality.

I went to Mauritius for business purposes.  I did have one day of free time due to flight schedules and meeting conflicts, so I took advantage of it.  Flying to Mauritius takes pretty much an entire day when you’re coming from the US West Coast.  There’s generally a change in planes either in the Middle East or South Africa, or even from there, it can take an addition 3 – 6 hours. That’s how far it is!

For me, this trip caused a lot of anxiety.  Sure, I had traveled alone before, but not like this. During the previous foreign trips I had taken, I would be meeting a group there.  In this case, there was a couple of office personnel, but I would not really be around them. I would not see them until the first set of meetings commenced.  It was outright terrifying to me.  All the way across the world – alone.  A week before the trip, I actually woke up to a pretty serious panic attack. The only reasoning was that I was scared to be alone in a very far and foreign place.

I arrived late at night, confused about the time change and worries about being completely alone.  I had the best room on my floor, so I was treated quite nicely.  Still, with all the comforts that the hotel had to offer, I was scared.  I couldn’t sleep and again experienced another panic attack. I feared getting lost. I feared making mistakes on my trip. I was scared of getting food poisoning. I was scared of being too tired to enjoy my time here. I was scared of being a failure at my meetings. I was convinced the company may have made a mistake of sending me here.

Still, because not everyone gets to go to this location, and the fact that the schedule allotted me an extra day, I wanted to make the best of it. I had heard so many great things about the beauty of Mauritius, so I would be at a complete loss if I didn’t take advantage.  I hired a private tour guide, and scheduled a full day tour less than 8 hours after my arrival.

I was so glad I did this tour.  I was able to see a glimpse of what Mauritius had to offer.  My only regret was that I couldn’t take more time to really appreciate it and learn about the history.  I loved seeing the waterfalls, the famed colored sands, their Nature Park (I was disappointed to find out that I was too short to pet the lion!).

When the work began, I was extremely nervous.  There was a group of people who I had worked with for so long, but never had the chance to meet.  Suddenly, all eyes were on me to ensure that this project was a success.  Long story short, it was.  The people were just as wonderful as they were via email and on the phone. The work they put into their facility was evident, and it’s clear why they are so good at what they do.  We completed the project with such success, that later, senior management immediately recognized our collaborative efforts. 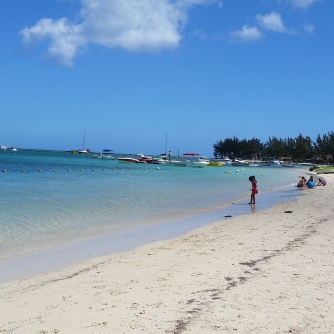 On the last day, I had some time before my flight departed.  I had enjoyed my tour so much that I decided to call the tour guide again for a quick drive to visit the beaches. I am so glad I did that! The beaches in Mauritius are so beautiful – they are straight out of a postcard.  The sand is different from any I’ve been on. My favorite was the beach at Pereybere – the sand was soft, white and light, and the water was clear, blue and calm. I took a few minutes to just sit and enjoy the view, and immediately, I was calmed by the tranquility.  I made extra stops to buy a few souvenirs (can’t leave Mauritius without a toy dodo bird!) and a last look at the beach.

Mauritius tested my limits when it came to travelling alone.  I am so used to being around people, that the thought of even going sightseeing alone terrified me. Aside from this, the very thought of running those business meetings, and knowing that I was solely responsible for the success of that project was daunting.  My over thinking invoked deep panic attacks that I hadn’t experienced in long time.

The funny thing is, after all that, Mauritius is one of the best places I have ever had the pleasure of visiting.  Looking at nature, meeting the people, being on those beaches, and then being successful on the project made me realize how great things really turned out.  I’m lucky and thankful for the experience. It made me confident to know that even half a world away, I was still strong.

I’ll never know if I can ever make back to Mauritius….but the experience there will stay with me for a lifetime!

*Disclaimer: I am not a person who goes on business trips for fun.  I’m sure that’s evident by all the anxiety I experienced. It was only by sheer luck that I had a chance to sightsee.  I was open for meetings and project prep, but it was decided at the last minute, and well after I had booked my flight that the meetings would be delayed one day later.